Obama has too many Czars!

Obama Science Adviosor is a freak!

C. Deeds past and present for Governor

Chesapeake being sued for using “Jesus name” in opening prayers!  We must pray according to government dictates!

Finally, a law saying Congress must read all bills!

I would buy anything from this dealer!  What a great American! I love how he slams the liberal babe! 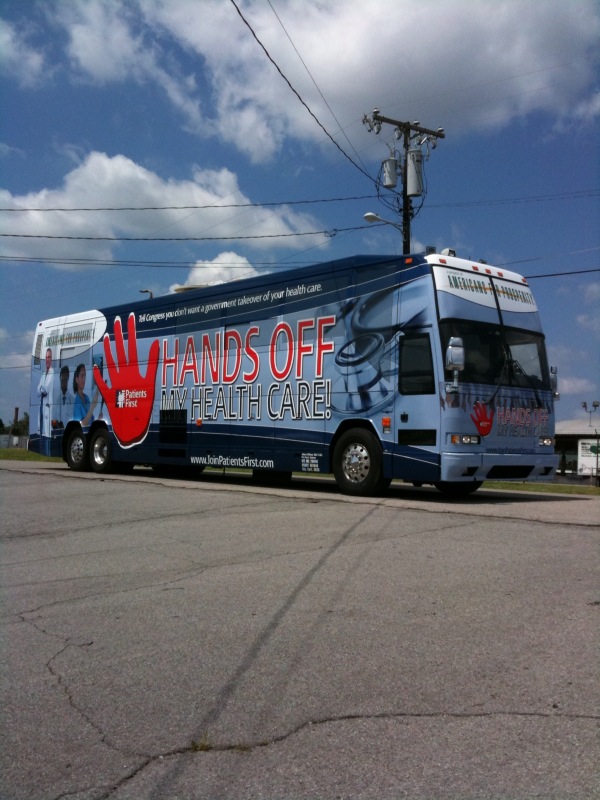 You can thank Americans for Prosperity for this bus and fighting for your freedom in health care!

“The 1968 TET Offensive broke the back of the Viet Cong insurgency in South Viet Nam. We lost more guerilla fighters than could be replaced. Any North Viet Namese unit that openly dueled with American units were decimated (it was far worse) by the combination of ground, artillery and air support. Had it not been for the American media and the way they reported the battle, the war would have been over by December of that year.”  This quote is from General Giap, commander of the North Viet Namese army and Viet cong.
Walter Cronkite was the first national  anchorman/”journalist” to state his opinion on national TV. It was the tipping point for the American people for sticking with the war in Viet Nam. After all, Mr. Cronkite was a trusted man and he had an emotional connection the American people……..his coverage of the JFK assassination. He reported his opinion as fact and the country followed his lead. The counter culture were already protesting against the war. Now a “main stream American” was asking how we can defeat such a strong enemy. Had he know the numerical facts of the battle, he might not have been so fast to report we lost the battle. If he did know and reported that anyway, it is even worse.
If Gen. Giap is right, our media, led by people like Mr. Cronkite, extended the war in Viet Nam. In extending the war they extended the list of our men who were wounded, captured and killed in action which led to America abandoning south Viet Nam. I know that the first Amendment of the Constitution guarantees freedom of the press.  This is not Yellow Journalism, it is RED journalism. I am not speaking of just the socialst/communist ideals. I am speaking of the blood of our fallen soldiers. There is no First Amendment protection for the press if it is getting our soldiers killed all because they have a political agenda.
Let us fast forward to both Desert Storm and the present war on terrorism. Sen. Kennedy, in both cases proclaimed from his “safe” seat in the Senate, “25,000 ocupied body bags coming home”. The media dutifully covered it from coast to coast. How many others in the Senate and House of Representatives spoke out against our troopers saying “your President lied, you(the soldiers) cannot win this war, and you( the soldiers, again) are fighting this war for BIG OIL and BIG BUSINESS”*. And once again there is the media broadcasting every dissenting word, like it is fact. Where were the stories and the other side of the argument. It was almost non-existent, except for the ALTERNATIVE MEDIA.
It is funny, at least to me, that Dan Rather eulogized Walter Crionkite. You remember Mr. Rather. He was the CBS Anchor man that tried to take down President G.W. Bush with a fictitious document with a FORGED signature! Had it not been for a savvy computer programmer, Dan Rather just might have pulled off his “framing” of President Bush. I wonder if Mr. Rather would like to be arrested for murder on the evidence of a FICTICIOUS DOCUMENT WITH A FORGED SIGNATURE? The sad part is that the media is still trying to impliment a socialist utopia using the tactics of both Mr.’s Cronkite and Rather.

PS * Tokyo Rose was senetenced to life imprisonment, as a war criminal, for telling our soldiers in the south Pacific YOU CANNOT WIN THIS WAR, YOUR PRESIDENT LIED TO YOU and YOU ARE FIGHTING THIS WAR FOR BIG OIL AND BIG BUSINESS. Just a question, if it is a war crime for MS. Rose to say these words why is it not sedition or TREASON for any American let alone Senatores, congressmen and our current President to say these things?

This time it is Hillary!

So what did America do that was so awful…..

MUMBAI, India — U.S. Secretary of State Hillary Rodham Clinton opened a three-day visit to India on Saturday by urging India not to repeat American mistakes in contributing to global pollution, and she passionately defended U.S. demands for help in fighting terrorism.

“We acknowledge now with President Obama that we have made mistakes in the United States, and we along with other developed countries have contributed most significantly to the problem that we face with climate change,” she said. “We are hoping a great country like India will not make the same mistakes.”

She was referring to Obama’s statement in Italy earlier this month that the U.S. had “sometimes fallen short” of its responsibilities in controlling its carbon emissions.

Yep, don’t you feel a little guilty?  You American!  You have contributed to climate change!  You have raised the quality of life on the entire earth but at the sake of the planet!  You and the American system have produced more food, energy, DDT, transportation, growth, millionaires, heating and air conditioning then any other nation!  Just think how healthy our planet would be without the USA!  You nasty, dirty American!

This is such a con!  (A simple con is one thing, but this is getting expensive!)The cleanest nation on the planet is the USA! Because we are the wealthiest!  Perhaps we should stop feeling guilty and start bragging!  We should export freedom inside a capitalistic free-market system!  And watch your precious little planet heal!

As if I cared about the planet, it can take care of itself!

Listen:  Why dont we focus on abundant, cheap energy?

Listen: EPA will control temperature in your home! and what color green are you?

Something uniquely different: Join us July 30th for our 1st Fundraiser
Brought to you by:  Richmond Tea Party and Richmond Patriots
Plans are being made!  Please join us for a unique evening of fellowship and fun as we celebrate OUR INDIVIDUAL LIBERTY, courtesy of the US Constitution.

What:  Cigar Fundraiser with whiskey and wine tastings, catered buffet, door prizes and hosted by WRVA’s Doc Thompson and The Lee Brothers!  Get your own Richmond Tea Party Cigar rolled by a professional cigar roller, learn about interesting whiskeys from a reserve manager…sample and learn about unique wines.

Reservations:  $40 pp/ $75 per couple
Non-smokers welcome.  Smoking allowed in the sculpture garden (outside) only.
Request an invitation by emailing saraj@richmondteaparty.com.   Time is running out – act now.  If you enjoy good food, good music, good people and good times, don’t miss this opportunity.

I can’t believe that I didn’t think of this!  Family Foundation’s blog  just posted a great clip of the musical “1776″.   Here is what they said:

One of the great movies of all time is the musical 1776. Fictional as some elements are (what true story does not get Hollywoodized?) it is still a lot of fun. Here is its terrific portrayal of Richard Henry Lee accepting the challenge to get Virginia’s General Assembly to agree to sponsor a resolution for Independence.

Question:  Would you have standed for Independence in 1776?  Are you sure?

In case you don’t know, the Lee family has a place at Smith Mountian Lake!  We absolutely love it!  It is one of the best lake’s on the east coast.  But something awful has happened…they closed the cliffs!  The cliffs are located on the Franklin County side of the lake and offer a great place to climb and jump!  It has been a “point of interest” and great pastime for as long as I can remember.  My kids have built memories there and so have I!  But no longer!

Why?  Because stupid, cock-eyed liberals exist everywhere…even at the lake!Well..here is the newscast.
Listen to this idiot!   “One person hurt is too many”….wow…what a hard hitting statement.  We have lost the concept of personal responsibility!  He has never even jumped!  How does he know anything about it?  Just like every other Liberal who thinks he know better how to live your life!  He probably to scared because he’s a wimpy girlie-man!

So why else close the cliffs…ready…..the environment!  What a goof!  “Most importantly is the beauty.  Too much foot traffic and it has hurt the plants!”  WHAT!  Oh , please!    Once again, liberals care more about a little stupid plant than Americans having fun and enjoying life!

I bet he voted for Obama!  Puke!